5 popular Employee Benefits that
you should avail to optimize tax
Bhavin Turakhia | March 24, 2017

According to the Finance Minister’s figures, just about a crore Indians pay any direct income tax. India’s Tax-to-GDP ratio has stood firm at 3% since pre-liberalisation years. This is why sometimes salaried employees feel like they have to shoulder a high amount of the direct tax distribution.

To assist the salaried class and also to encourage consumption, various tax exemption schemes have come up. Similar tax exemptions have been granted on certain types of bonds. There are also various other expense-based exemptions that the government permits. Many salaried employees likely use these exemptions in one form or another.

The government allows a total of 26 types of allowances and 25 perquisites. However, due to the high amount of paperwork and time involved in making use of these, most of us either do not know of them or fail to use them. With advances in technology and innovative new products, this is set to change. Zeta has a wide range of products under the Optima portfolio that have made keeping track of claims, submitting proof, submitting claims, enjoying tax benefits, and the eventual credit of savings, a breeze.

The government allows a total of 26 types of allowances and 25 perquisites.

Here are five of the most popular ways salaried employees can spend and save tax:

It has become a repeated platitude by now that access to the data and communication networks should be declared a human right. Interconnectedness is fast becoming the default state in developed and developing economies. And India’s telecom environment is evolving fast and data costs look like they will drop. Under current laws, salaried employees can use spends on broadband, mobile, and communication bills, to save on tax. On an average, companies tend to cap claims at Rs. 2,500 per month, and this is more than enough to enable users to get that essential new 4G internet connection.

India is yet to grow to a point where the state and private players together deliver quality healthcare and medicines to most Indians. For those who have access to reasonably good healthcare, it often becomes the fastest inflating cost header in their daily lives. Estimates peg the higher end of healthcare inflation at 20%. In this situation, what could be a better benefit in your salary than being able to save upto 30% in taxes on your medical spends?

While medical inflation hits you where it hurts the most, food inflation is no laughing matter either. Something as basic as food and grocery spending can eat into your monthly budgets more than you can imagine. By spending through meal vouchers or claiming such expenses as tax benefits, you can add another Rs. 4,500 in tax savings per year.

Whether crude oil prices were trading at $80 a barrel or $50 a barrel, Indians paid close to the same amount for their petrol and diesel. This is mainly due to the heavy taxation on fuel. Also, this is causing transport costs to go through the roof. It is important for salaried employees to be aware that they can claim a conveyance allowance of up to Rs. 24,000 every year. This definitely is one exemption that is not advisable to forego.

As the India growth story moves forward, India’s middle class will travel more than ever. It’s become a uniquely important form of finding a good work-life balance. With the LTA, you could claim travel expenses for yourself and for your immediate family. Considering an industry average of close to Rs. 1,00,000 in LTA every alternate year, you could knock off a huge chunk of the tax exemptions available for your salary bracket by using the LTA provision.

Anyone who has ever used some of these claims will attest to the painful process of hoarding bills, keeping accounts, writing out claim vouchers, and then waiting for the claim to pass through. For example, the operational hassles of maintaining paper based meal vouchers result in a significant amount of these vouchers being lost or unused. Due to this, salaried employees lose out on potential tax savings. Now that an increasing number of salaried professionals are going paperless for their tax claims by making use of new technology, March-end can finally stop being the dreaded time of year.

Stay up to date with latest employee trends.

An introduction to employee tax benefits 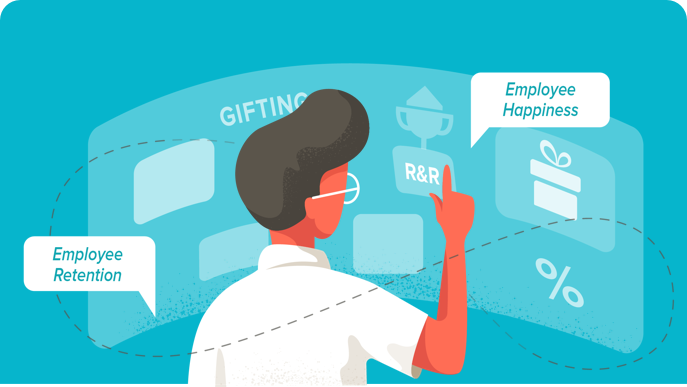 Everything you need to know about employee gifting and R&R